Respect the New YA

We get it, Judy Blume helped you understand your hormones. You probably also recall the strange pleasures of Sweet Valley High (Diablo Cody is banking on it). You felt strange about having a crush on 12 year old Ender when you were 18. Maybe you have even furtively consumed some of the more recent YA offerings like Twilight and all the Harry Potter books when you were on Christmas break from college. You see yourself as an ally of the young adult genre, maybe even a connoisseur of its early period.

If this is your position, you are as bad as dansko-wearing baby boomer who believes that he learned everything he needed to know about “rock music” before 1975.

The YA fiction of today is not just more plentiful (now taking up whole sections of book stores), it is also . . . BETTER.

I know, I know, Twilight’s lack of sound sentence structure and female agency might have scared you off, but Twilight does not represent all of new YA. It doesn’t even fairly represent all of recent vampire themed YA books.

Take for instance Vampire Academy, the excellent series with a butt-kicking heroine and strange racial politics around vampires, humans, and people who are a mix of vampire and human. These books are funny, plot driven, and filled with the thrill of actual sex that neither exploits youthful bodies nor denies their desires.

Part of the reason you should be reading these books is that they will all be made into movies, and based on the failure of the first Hunger Games movie to live up to the complexity of the books, you should just read all the books instead.

The Hunger Games is the most recognized example of the kind of quality I am arguing pervades the entire genre. It might not be original, but it is one of the most masterfully paced books I have ever read. Pacing and economy of plotting are not valued in adult literature, and that makes many adult books unnecessarily long and boring.

So if you are wondering where to start in this brave new world of YA, you can either go to your local book store and ask the 13 year old girl dominating the one comfy seat what she is loving these days, or you can start with:

1. The Vampire Academy series (if you like the first book, you will probably enjoy the rest)

2. If you haven’t read the Hunger Games, get over yourself, and spend Thanksgiving day devouring these. Really, it is only going to take you a couple of hours.

3. Sarah Dessen’s work is the new Judy Blume. Parents are not always good parents. Sex can be both good and bad. Adolescence is hard because of hormones, but it is also hard because of poverty, gender, and class dynamics. It is not all universally good (the latest one sucked), but try The Truth About Forever, Just Listen, Lock and Key, or Along for the Ride. 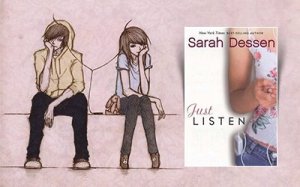 Fan art from The Reading Girl

One thought on “Respect the New YA”