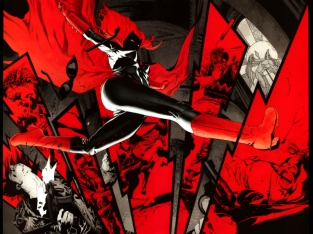 We are living in a new golden age for women in comic books. Sort of. Even though Batwoman (above), one of the only LGBT characters to headline her own title, couldn’t get married, even though publishers continue to put out putatively teenage women with boobs the size of their heads and the resulting criticism itself results in rape threats, women in comics have made tiny steps forward. Not figuratively.

I’m talking about the wedge heel in particular, and more practical footwear in general. Feet are not usually that important to artists. Some of them cannot draw feet of either gender. But while male superheroes have long had nondescript bootie-looking footwear, many heroines have had to fight crime in heels, sometimes stripper heels, bringing to mind the quote about Ginger Rogers, but with more cosmic radiation. 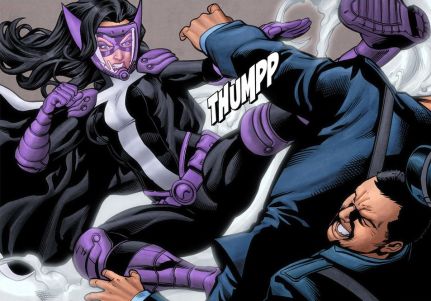 The heel is not just a 90s thing. From the beginnings of comics some of the more prominent heroines had them, though in keeping with the times both the heels and the costumes were more modest than some today. One early notable exception came during the character-defining arc in the late 80s/early 90s where She-Hulk (below) tried to balance her day job as a lawyer with her costumed adventuring, which led to some fantastic 9 to 5/ Working Girl business suits with Reeboks. She has been drawn with sneakers off and on ever since.

I would give Isabel Marant’s now-ubiquitous wedge sneaker a lot of credit, though I would also give credit to the comic writers and artists who give these details attention. Greg Rucka, who co-created Batwoman, is particularly good at writing comics that pass the Bechdel Test, and Amanda Conner, responsible for Power Girl, is one of the more prominent women working in comics today. Books and movies like the Hunger Games and Divergent also help by featuring female leads who need to be able to run and kick plausibly (throwing shade here at Anne Hathaway’s Catwoman. And Halle Berry’s. And even Michelle Pfeiffer’s). The end result is that some of the most stripperific characters have been toned down just a little bit. One of them even got pants (below). They are still bruisers and (depending on the artist) sex fantasies, but by getting rid of the spike heel their feats are slightly more plausible, and slightly more comfortable. 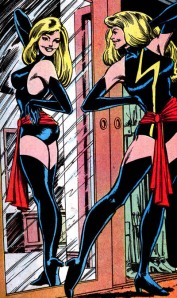